If you know me you probably know that writing a post about recognition or honors received is rather uncomfortable for me. I am much more comfortable sharing the latest doggie adventure in the studio. But I owe it to those that believe in me and took the time and care to nominate me for two extraordinary things to write about it. I also feel the need to recognize the amazing people in my life that made it possible for me even to be on the radar to be nominated. I’m not trying to build up the recognition (or myself especially) to be more than it is but rather to just give thanks and to accept the recognition with great appreciation (I am terrible at accepting gifts as well!).

During my first year at Presbyterian College I came home and announced that I was going to be an art major to my parents. I don’t think that initially went over too well with my business-oriented father. However, after the initial announcement (and shock perhaps?) my father joined my mother in being my biggest fan. I don’t think that it was bad that I had a bit to prove to my father; even I tell my older elementary artists that ultimately want to be artists about responsibility and about supporting oneself. I did listen carefully to my father about business and got a minor in

While I was on my honeymoon with my fabulous husband I found out that I was chosen as Cobb County’s “Outstanding Visual Artist” for the Ovation Awards:  bliss on top of bliss! It still has not sunk in that I was the recipient of the award; it is just too much. I know that I did not receive the award through my own efforts though. The same is true for the next recognition: “Class Act” teacher by 11 Alive and Donna Lowry. I found out the day that I got back from my honeymoon that I was chosen. 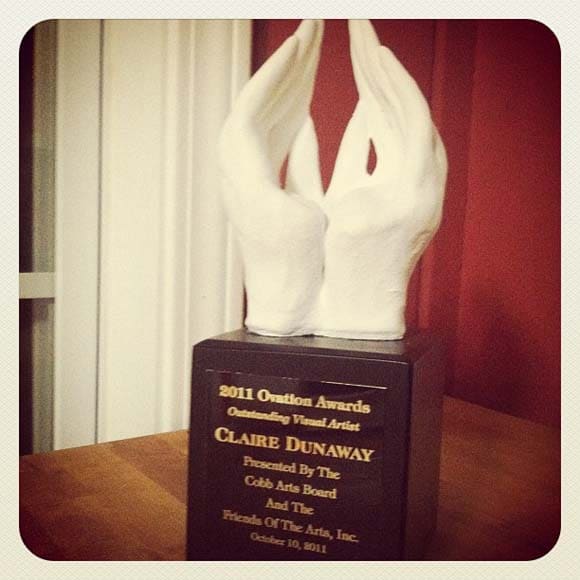