Some of you may know that I have a soft spot for pitbulls. As much as I adore this misunderstood breed, it is rare that I get an order to paint one. I was beyond excited when I got the order to paint Lucky. It was hard to pick out just one photo to work from; he’s such a ham and quite photogenic! Lucky is a lucky rescue pup. I think that he spreads a feeling of luck all around as seen in all of the hilarious outfits his Mama puts on him and the smiles he brings to the faces all around him! I certainly felt lucky to have the honor of painting sweet Lucky! The Lucky painting was a present from my sister-in-law’s brother to his wife.

I wanted to show the love that Lucky is filled with. He demonstrates the truly tenderhearted, loyal and often humorous nature of pitbulls when they are not used by ill-intentioned people for fighting, status, etc. Did you know that they used to be ‘nanny’ dogs to watch over children? Two of my roommates were pitbulls when I lived in Utah and I have never seen two dogs more loving and tolerant of swarms of kids (and the grumpy cat, too!).

Here’s to an awesome dog named Lucky. And here’s to awareness being spread about the awesomeness of the pitbull breed as well as the evils and prevalence of dog fighting and unthinkably horrible treatment common toward this innocent breed. Check out and follow two amazing rescues specializing in pitties, Eagles Den Rescue and Dixie Dog Rescue. 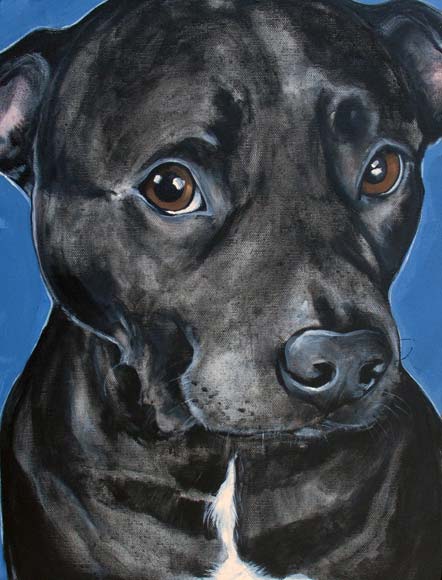